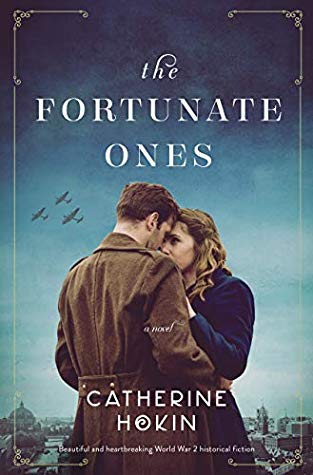 The Fortunate Ones was a spellbinding tale of political strife during Hitler’s reign, and it what it meant to survive in the harsh conditions where food was scarce, medicine was a joke, and war was looming on the horizon or already at their front door.

Felix is just a normal young man attempting to survive, in a place that doesn’t seem to care overmuch how he might fare. Being a prisoner in a camp, his future appears bleak until he meets Inge…a woman who tells him that her name is Hannah. He believes her a prisoner, and in a way she is one, having been forced through an arranged marriage to a monster who does horrific experiments on the prisoners within the camp. Yet she’s unaware of such, kept safe at home where her husband’s abuse speaks volumes.

Inge is a brave woman, though I preferred Felix’s side of the story in all honesty. While both perspectives were of interest, there were points in the story that seemed to drag. I liked how the ending wrapped up, and I rather enjoyed the author’s writing style overall, despite where parts of the story balked. I’ll definitely be checking out more by this author in the future, and I’m awarding 4.5 out of 5 stars for a wonderful trip through WWII. Though several moments were bleak and grim, the story itself was a good one, and recommended for fans of that time period.

One thought on “Arc Review: The Fortunate Ones”

Share book reviews and ratings with Reader of Books, and even join a book club on Goodreads.
https://www.goodreads.com/review/custom_widget/41152861.These%20Books%20May%20Destroy%20Me?cover_position=left&cover_size=medium&num_books=5&order=a&shelf=currently-reading&show_author=1&show_cover=1&show_rating=1&show_review=1&show_tags=1&show_title=1&sort=date_added&widget_bg_color=FFFFFF&widget_bg_transparent=&widget_border_width=1&widget_id=1650141464&widget_text_color=000000&widget_title_size=medium&widget_width=medium
Join 717 other followers