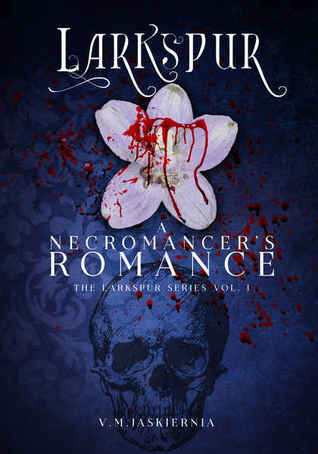 Notes: Darker than what I typically read, but still worth it!

This was a strange, dark, and lyrical tale of a necromancer. It’s a bit unusual, as I typically am not a dark romance reader, though I’ve heard of this from a few friends and decided to give it a try.

Pierre Salvador is a surgeon and the heir to a duchy, returning to court after years away at University. Now the childhood friend he left behind has grown-up–and is still not wed. But she does not know of his dealings with Mora, the Lady of Death, or what the jealous goddess wants him to do in return for her dark magic.

I did think that this could use more, the slow build crescendo to the end was nicely done, though it left readers hanging. I liked Pierre, and I liked the idea behind the story as well. I was honestly more interested in the boy who wanted to bring back a girl (won’t say more due to spoilers), but the entire novel speaks of even more stories to be had in the next volume of the adventure.

I’m not going to say that this was one of my favorites, though it is one that I’m still thinking about days later. The ideas for the story are intriguing, and I would love to see how much more in depth the necromancy becomes. Will it be as unique as Dresden Files, for example, or will it not deal with magic but more of the romance? I have added the next book to my wish list, and hope to soon be able to purchase it when I am able.

As it stands, I’m giving this novella a 4/5 stars for creativity, a nice slow-build of a plot, and for the fascinating characters!