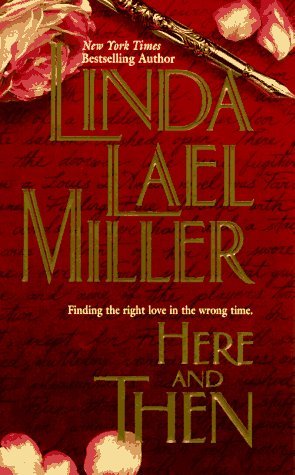 Title: Here and Then

This was a fun, quick, entertaining read. I loved the character Beth, and how she handled her situation, though I did think she was awfully quick in jumping into bed with Mr. Too Handsome Too Stand Near Without Fireworks Going Off.

This was a time travel romance, which is my favorite kind of trope, and I really liked how this was done, though I wished it would’ve explained more of the science behind it than the necklace just somehow taking Beth back into time again and again. I understand why the science wasn’t explained, but I feel like it could’ve been.

I did enjoy the banter between Beth and the Sherriff. I also enjoyed when she took him to her time period, and introduced him to pizza, the television, cars, and much better coffee than what he’s used to. There’s some satisfaction in showing him around, and letting him see that she’s from a time period where women are allowed to vote, wear pants, and act mostly like men.

I will warn that this book has men that are preset in their thoughts about women being helpless, weak creatures. Women aren’t allowed to vote in that time period that Beth finds herself in, after all. Women were also not allowed to play poker/cards. They couldn’t wander the streets in trousers/pants because it was unseemly for a woman to do so. They couldn’t swear, they couldn’t drink, and most of all, they couldn’t own land. We’ve certainly come a long way, though it still makes me outraged at the unjustice of it all, the unfairness. It’s still, sadly, going on today, but things are slowly getting better.

I really enjoyed this, despite the way women were treated back then, and despite certain comments that were made. I do warn readers that there is one attempted scene where a banker tells Beth that if she doesn’t sleep with him, he’ll ruin her and make sure she’ll never have money again, but aside from that nothing to violent in the book. It alludes to events of the first book, which I hadn’t realized that this was a series, but now I am going to go and hunt down book one, and see if there are others in the series, because it’s too fun not to read.