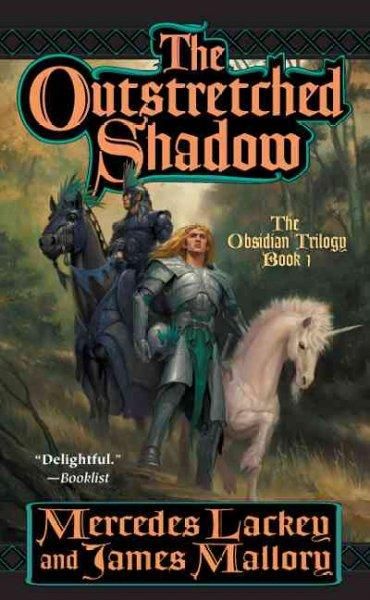 I’ve read Mercedes Lackey ever since I was thirteen years old, and first picked up “Arrow’s Flight”, the very first book in her Tales of Valdemar series. She’s one of my absolute favorite writers, and I have at least three series that I haven’t started reading yet, so that I could still have a few worlds to play in, in case she for some reason can’t write anymore. I’ve pretty much read everything she’s put out, especially everything to do with the Valdemar series. It was one of the first major, long, and epic fantasy series that I remember stepping into, right along with The Wheel of Time Series, The Dragonlance novels, and many others. As an effort to review every book that I have in my room, this is one of the first that I picked up and read again, for the third time, for a refresher so that I can actually remember small details-certain characters, and places, for example. It’s been at least three years since I last looked at this book, though I have read other books by the author Mercedes Lackey. James Mallory is a new one, however, and I’ll certainly have to step into his other writings as well.

The Outstretched Shadow is a new series, not set in Valdemar, but still interesting. It’s got elves, princesses, mysterious books that contain magical mysteries, good vs. evil, a likable main character, and a lot of world building. I read this, and wished that my own book that I’m writing was as epic in scope as this book is, its got so much rich detail in it! And it may seem like a long book, but you hardly notice. I opened it up at the first page, and almost three hours later I’m closing the book and wishing that I had the second one. This is one series that I haven’t yet reached book 2 of, let alone the second trilogy that follows. While I’ve collected Mercedes Lackey over the years (her books take up at least three shelves in my room), I’ve clearly fallen behind in this series. To be fair, I’ve read quite a bit of other books, and other genres, as well in that time span, trying to broaden my horizons.

But if your new to Mercedes Lackey (or James Mallory) then you won’t regret picking this book up. It starts off talking about a boy going searching for something new-stories, food, instruments-and finding himself buying some mysterious books. Books that hide themselves from other people, like the store owner, so he won’t get into trouble for buying them. As the story progresses, its clear these books are dangerous, and his father wants him to get rid of the books…or suffer the consequences, much like his sister had. But to Kellen’s (the main character) mind, he doesn’t have a sister-he’s never had one! And then, as things progress from there, everything falls apart and he finds himself fleeing the country in order to stay alive. There’s unicorns that talk in this book, there’s giant eagles, there’s elves, and centaurs, and a lot of demons. This book has every kind of mythical creature you could want in a fantasy story. Kellen is an awesome, if slightly naive fellow who isn’t much of a fighter, but rather a healer. He’s capable of so much more, however, as he goes on-especially with the help of his friends.

I usually try to compare this to other books, but the only thing I can think of is the Wheel of Time series, or perhaps the Sword of Truth series by Terry Goodkind. But those are vastly different than this series.

Regardless, if you haven’t read this yet you really should pick it up at your local bookstore, or library. It’s epic, it’s fun, and it’s got loads of action and adventure and magic just waiting to be discovered!

In the meantime, I’m off to find book 2 of the series so that I can continue to read this series.

In other words-Pass Me That Book!